Our Dad fought in WWII.
He was a 1st Lieutenant in the USMC.

We are proud of him.
He was brave and he fought for our country's freedom.
The after effects of fighting in a war were with him all his life.
Sometimes, he was so far away, in thought...
and by the look on his face, we knew he was back in the war.

Many of his close friends did not make it home
and I know that haunted him.
There was a sense of guilt and sadness over this loss.
Why him, why not me?

He liked to talk about the war and all the places he had been.
Nothing gruesome, mostly historical.

Unfortunately, I was a teenage girl
and didn't like to listen. 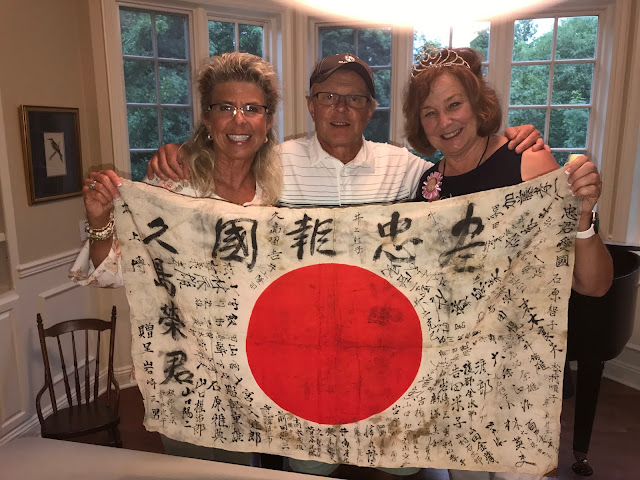 The story, as told to my brother, goes like this-

During WWII, Dad (William Cunningham, 1st Lt. USMC) engaged in fighting
on two islands, Saipan and Tinian.
I don’t know on which island he came upon the flag.
They landed on the islands under gunfire.
Many of the men did not make it to land.

His platoon had secured a hill and set up camp for the night.
Everyone needed to dig a fox hole
however no one could dig deeper than six inches as they all hit lava rock.
During the night as he lay in his fox hole
he noticed Japanese soldiers walking through the camp.
He reached for his rifle but there was a problem.
His barrel was pointing in the wrong direction
and to get into position he would have to move in a way
that would have alerted the Japanese soldiers.
A soldier next to him in a better position whispered “I’ve got it.”
I believe other soldiers were also aware of Japanese soldiers
that had come into their camp.
A skirmish ensued.
Afterwards the flags were removed from the casualties.
Now, the right thing to do
is return the flags to the Japanese soldier’s families.
I know Dad would be in favor of this! 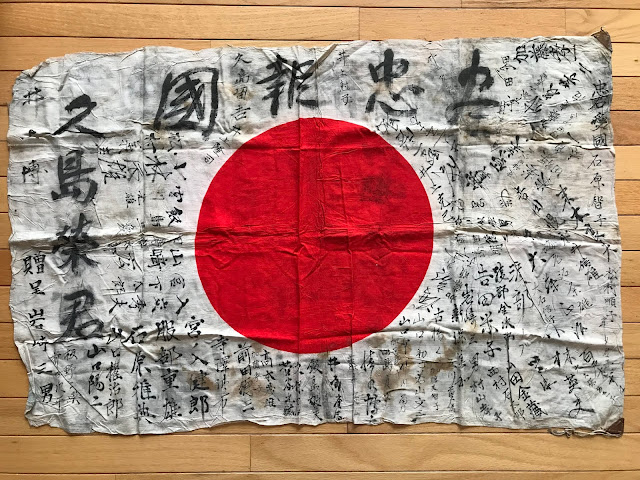